Tips, Tricks, and Hints to Get Your Grimoire On

There’s nothing quite like the rush of interest that tends to accompany Bandai Namco mobile games based on popular anime series, and Black Clover Phantom Knights (Free) definitely fits that description to a tee. The character-collecting RPG got off to a bit of a rocky start on iOS in the U.S. with a delay when it appeared to be launched, but is now available for play.

For those unfamiliar with the source material (and knowing full well the hazards of trying to summarize a long-running manga/anime franchise in one paragraph), the story of Black Clover revolves around Asta, a boy who grew up without magical abilities in a world where everyone else knows how to sling some spells. Undeterred, he decides he’s going to try to become Wizard King anyway, making him sort of like Hermione Granger if she had two muggle parents and a lot less brains.

The narrative of Asta, his rival Yuno, and his friends and enemies among the Magic Knights plays out throughout Black Clover Phantom Knights, so you’ll get a crash course in the whole saga just by default. Of course, there are plenty of other places you can read up on this tale, so let’s jump into what this game is all about.

If you like your mobile games on full-time easy mode, this might be one for you. While Black Clover Phantom Knights has an ‘Auto’ button, that’s sort of deceiving because everything is on auto most of the time anyway. All you’re doing by tapping that button is deciding whether to let the game do everything for you or to let it handle basic attacks and allow you to choose when to unleash the powers of your Magic Knights.

That’s not to say there’s no strategy or timing involved at all. In every level, you’ll command a Brigade of five characters, each of whom will fight on their own. Assuming you have the ‘Auto’ toggled off, your job is to decide when to tell them to use their Arcane Arts (solo abilities with a variety of effects) or the All Out Magic ability that sees characters team up for one big attack. The former can be activated once the blue gauge under each character’s picture is full from collecting blue gems that drop during battle, while the latter has its own meter and button (can’t miss that big ‘A.O.M.) that fills up thanks to red gems. 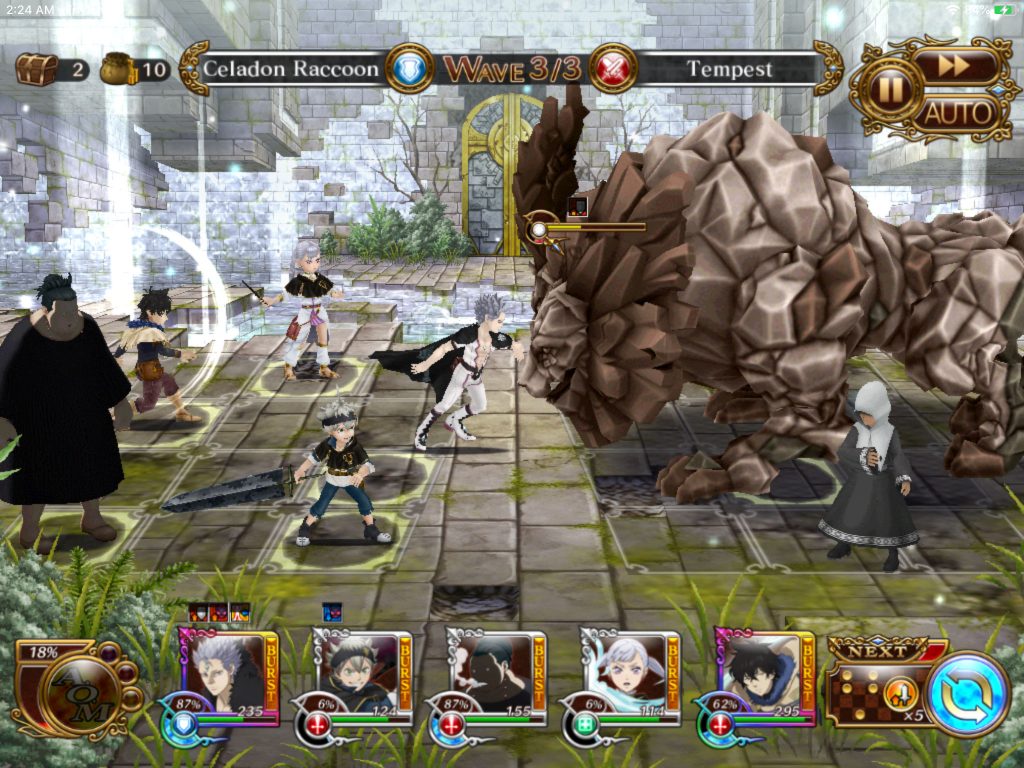 The formation of your characters also matters. Your Brigade will line up to fight based on the formations you pick, which have colorful names like Steel Blue Goat and Celadon Raccoon. Each formation grants unique offensive or defensive stat boosts to the members of your Brigade, and you can toggle between two that you’ve selected using the blue button in the bottom-right corner of the battle screen. A cooldown timer means you can’t just switch back and forth willy nilly. 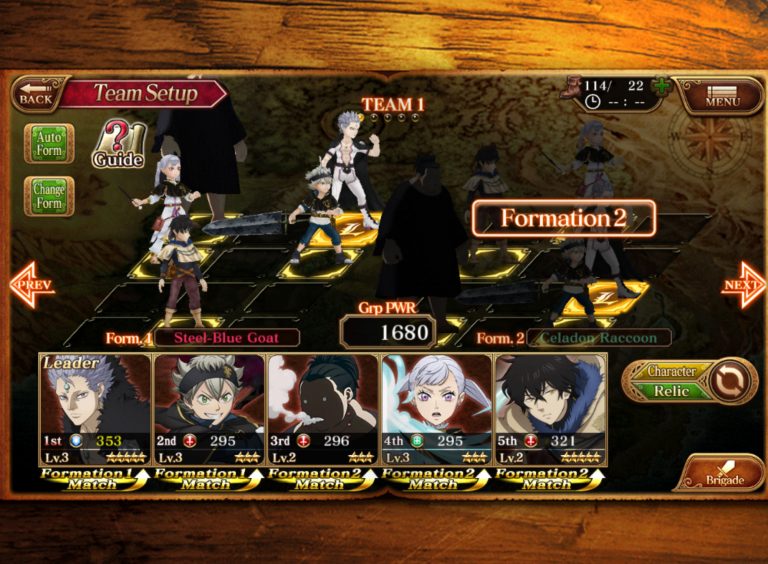 Bonus tip 1: Characters get bonuses for being part of specific formations, and these can be pretty significant. If you hold down on a character profile in the ‘Brigade’ screen, you can see keywords that give you hints to which formations give them buffs. For example, Asta (Demon-Slayer) has ‘Bull’ for Formation Type 1 and ‘Goat’ for Formation Type 2. When picking the five members of any lineup, you should be able to match all five to one of your two formations, especially once you’ve unlocked a good number of characters.

Bonus tip 2: Where you place your characters within a formation matters too, particularly because any character in the front row gets targeted by enemies more often than those in the middle or back rows. Thus, it makes sense to place characters with plenty of HP and high defense stats up front, but you’ll also want to make sure your characters behind them have abilities that are effective at range.

And that’s … kind of it? The in-game guide can tell you more about the wide variety of status effects that can be inflicted in combat, but other than that, there aren’t really a lot of intricacies to master in battle. Getting strong characters, putting them in the right formations and learning when to use your abilities and switch to the other formation are the skills you’ll lean on the most. Everything else literally takes care of itself.

Now about that strong characters part …

As with many games in its genre, Black Clover Phantom Knights uses a star system to indicate the rarity and starting strength of its characters. They can go as high as six stars once evolved, but five is the max to start (at least at the time this guide was published).

By tapping the ‘Summon’ icon in the game’s main navigation menu (located at the bottom of the screen), you’ll be whisked away to the gacha goodness of obtaining new characters. Most of the summons are done using the game’s premium currency, Black Jewels, though there are also summon tickets and other freebies you’ll encounter to make draws without said Jewels.

While you can summon as few as one character at a time, the best use of your resources is to look for 10+1 or 11 summons, as you’ll essentially get one character for free. Read each different summon carefully, as they all have different 5-star characters available at varying rates. 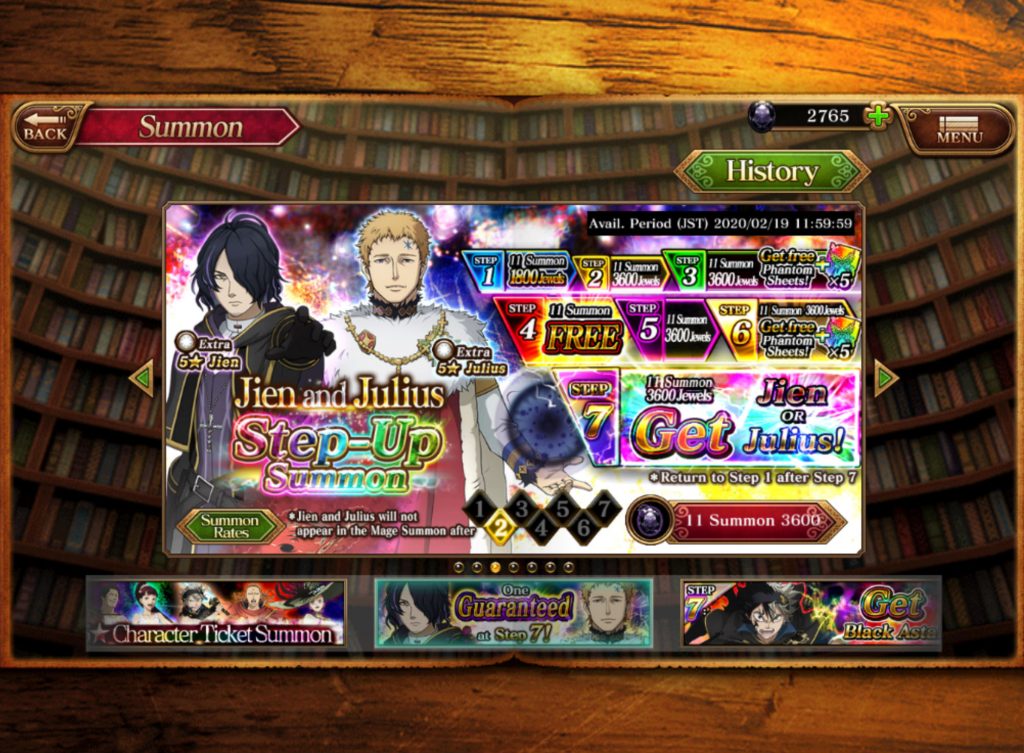 Bonus tip: Black Clover Phantom Knights also makes use of a number of “step-up” summons, which are multi-part deals that guarantee you a 5-star character at the final step. These are worth your effort as you could draw other 5-star characters along the way, but as they only are in effect for a limited time, the drawback is that you could start along the path and never reach the step with the guarantee. Be sure you either have enough Black Jewels to knock out every step or can reasonably acquire what you need prior to the end of a step-up summon’s time in the store.

Another thing to keep in mind is that sometimes summons will not give you characters outright but instead give you Sheets — as in the pages from a book kind, not the 1800-thread count kind. Similar to shards or the like from other mobile games, collecting enough Sheets can allow you to unlock a new character or bump one you already own (when combined with special items called Phantom Sheets and the proper amount of Yul, the game’s basic currency) up to the next star rank.

So while it can be a bit of a bummer to get Sheets instead of whole characters from a Summon, it’s not all bad. Just consider that you’re that much closer to unlocking or ranking up a character next time.

You’ve probably guessed by now that you can buy more Black Jewels via in-app purchases, and indeed, that’s how Black Clover Phantom Knights makes its dough. Do you have to buy them, though? We’d say no.

There are several methods for getting Black Jewels for free, so let’s take a look at them: 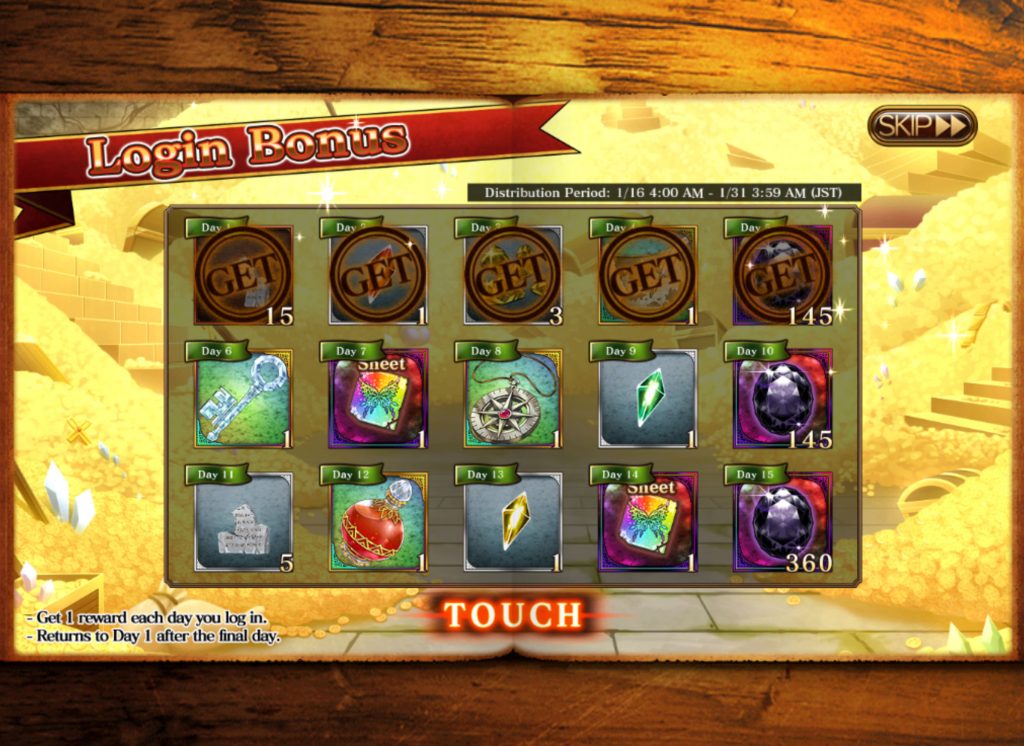 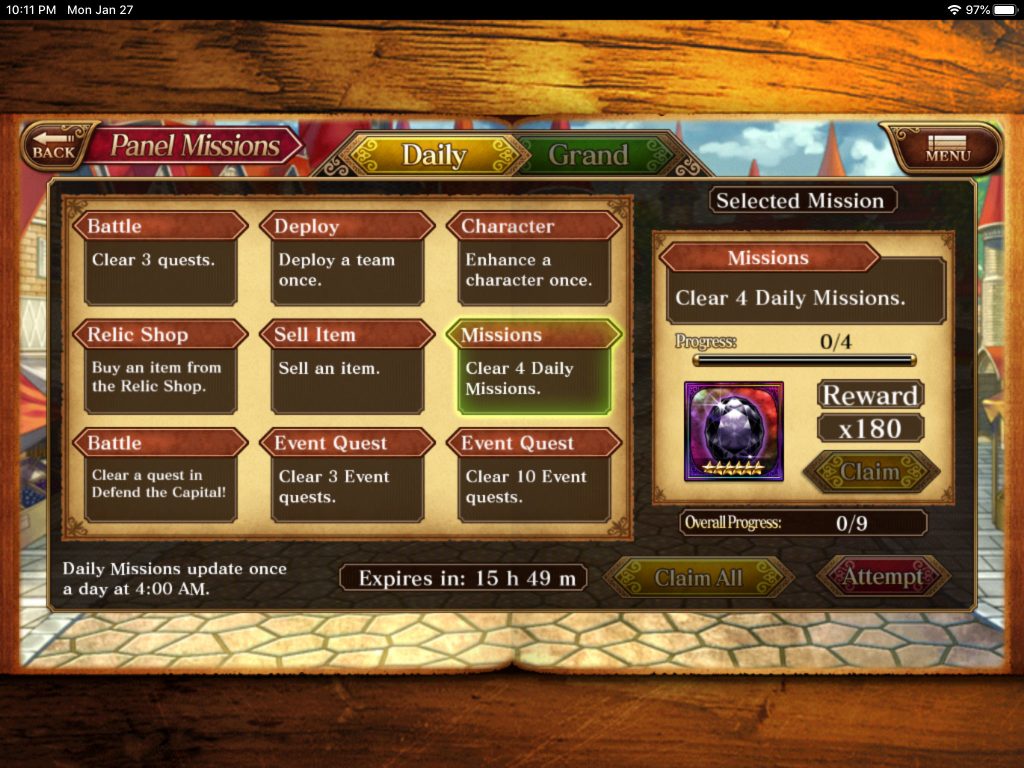 Note that Black Jewels and other rewards often get sent to your Presents stash. Unclaimed rewards disappear in 14 days, so be sure to tap that ‘Presents’ icon and collect them often.

Black Clover Phantom Knights has its own interesting twist on plain old leveling up. As your Magic Knights successfully complete battles, they earn Grimoire Points (GP). These can be spent to unlock nodes on a character’s Grimoire Board, which you can access simply by tapping their profile picture from the ‘Enhance Character’ menu.

Each Grimoire Board is essentially an experience or skill tree that gives the character a stat boost: things like more HP, higher attack or defense ratings, and more. At times the path will branch and you’ll have a choice of different nodes to unlock, while at other times, there’s only one way to proceed. Every node has its own cost in GP to activate. 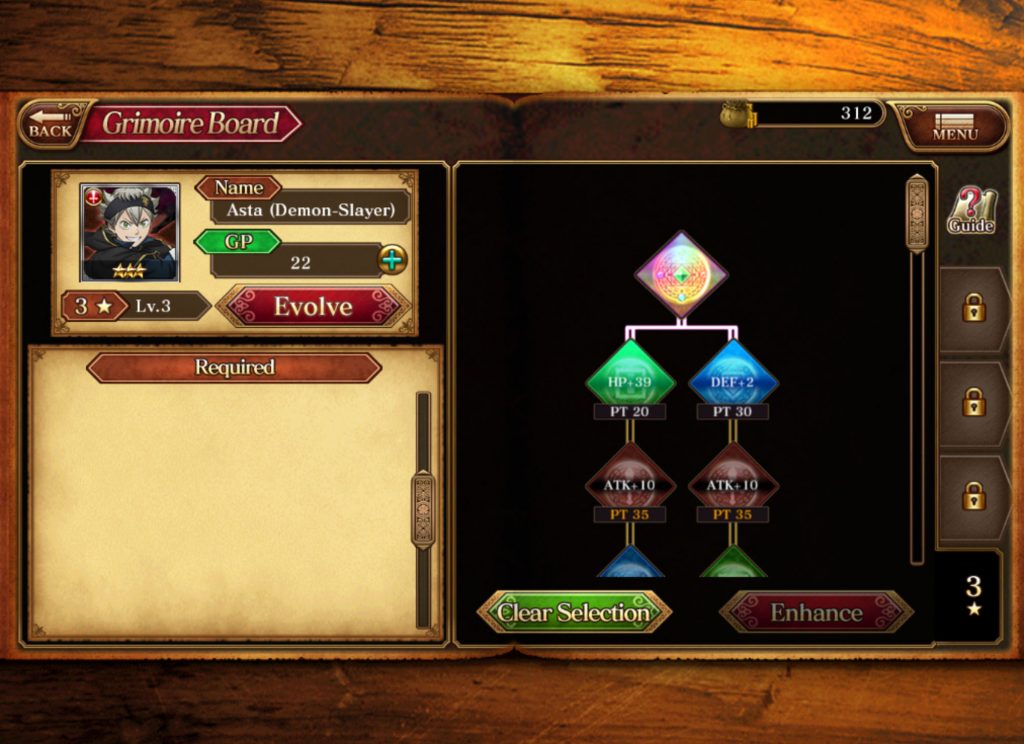 Don’t have enough GP? You can use items called Slates to instantly give you more. Simply tap on the ‘+’ symbol next to a character’s GP total, and you’ll see a screen that looks like this: 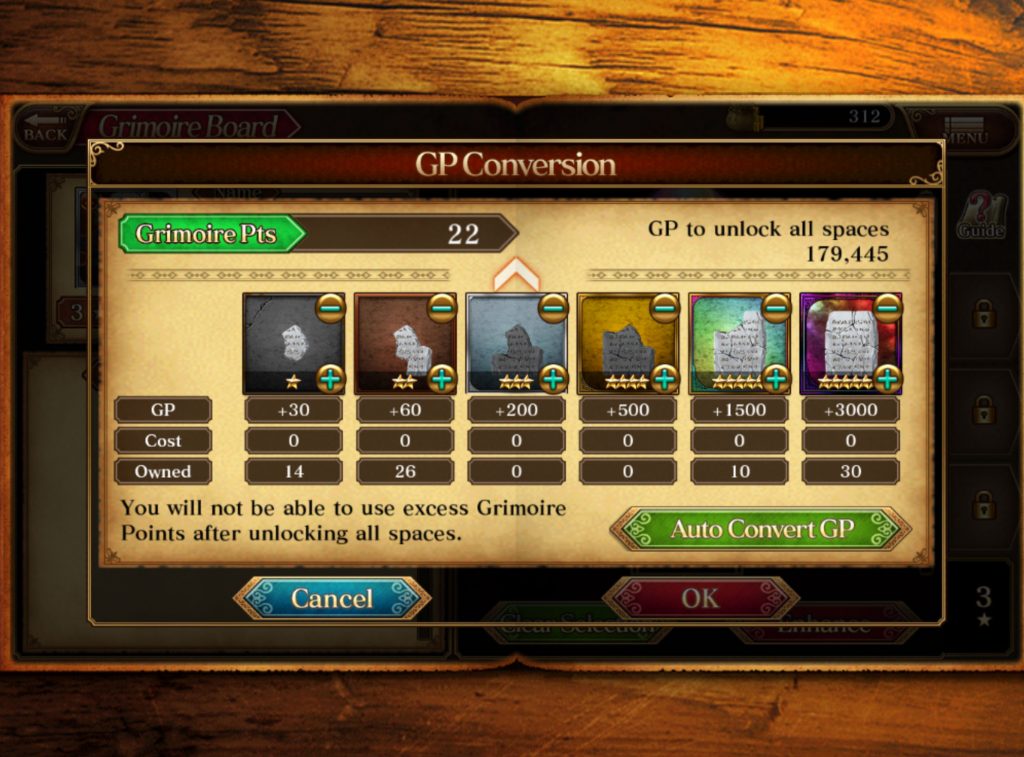 Tapping on the plus sign by each kind of slate will convert it to GP, and you can use the minus sign to change your mind if desired. Perhaps obviously, slates with more rarity stars convert into higher amounts of GP.

The other way to improve your characters is to outfit them with items called Relics. Each character can utilize two different types of Relics at a time, and every Relic has its own beneficial effects. To equip or unequip Relics, head to the ‘Team Setup’ screen and tap on the ‘Character/Relic’ button near the bottom-right corner. That will open up a grid for the characters in your current Brigade, from which you can tap on either slot for any of them and equip or unequip any Relic they can use.

Relics can also be enhanced to have greater effects, provided you have another copy of the same Relic, certain special items and enough Yul to complete the process. Check out the ‘Enhance Relic’ option in the ‘Brigade’ menu and tap on any Relic to start. 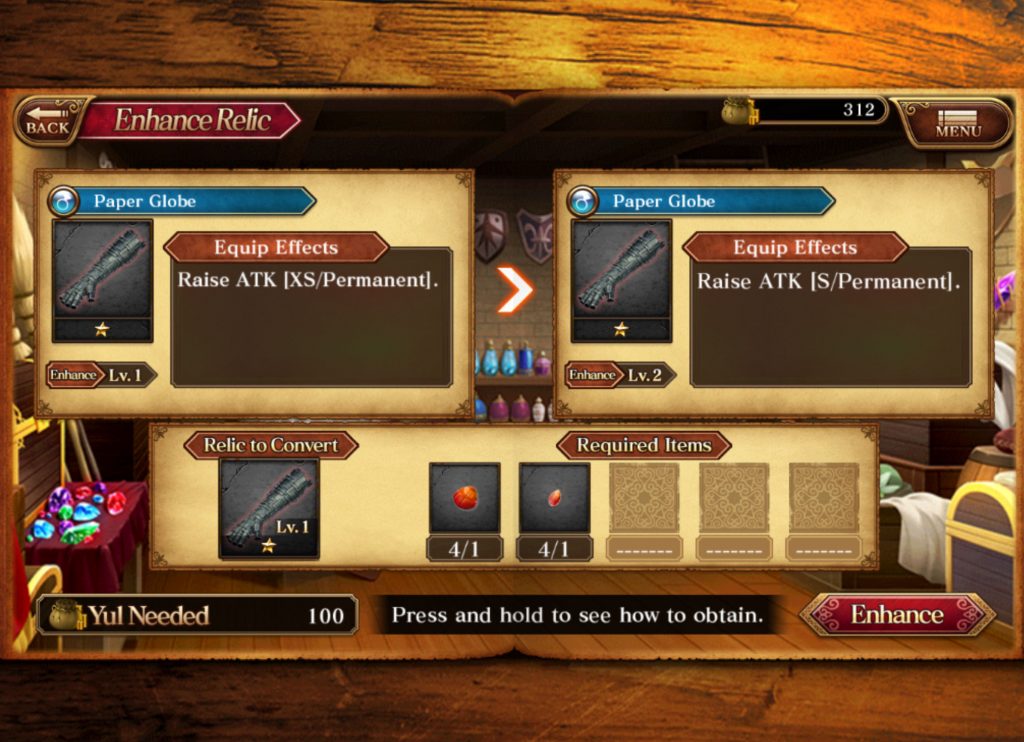 Relics can be sold for Yul if you don’t need them, but their ability to enhance duplicate copies is, generally speaking, much more valuable. In other words, don’t sell your Relics unless there’s really nothing else you want to do with them.