Sports and adventures on offer this month

Microsoft has announced the Xbox Games with Gold lineup for May 2019.

Kicking things off is Marooners, available May 1 to 31 on Xbox One for subscribers. Join up to 6 of your friends on the couch or online in this party game, as you battle it out in 25 different games and arenas.

Then, from May 16 to June 15 on Xbox One, subscribers can get The Golf Club 2019. This sports title comes with a whole host of new content and features across all aspects of the game, from single player to online play and the course designer. It also features the PGA Tour license.

For members on Xbox One and Xbox 360, Earth Defense Force: Insect Armageddon will be free from May 1 to 15. Thousands of aliens and giant insects are invading the planet and only the Earth Defense Force can stop them. Take part in non-stop bug killing action, even if it means turning an entire city to rubble.

The second free Xbox One / Xbox 360 title is Comic Jumper, available May 16 to 31. In order to save his own poorly selling title, Captain Smiley must work-for-hire and earn money by fixing the problems within other comic books. Leap into the different genres of Fantasy, Silver Age, Modern and Manga and raise the funds necessary to get his series back up and running.

These titles are available as free downloads for a limited time, for qualifying paid Xbox Live Gold members in all markets where Xbox Live is available. 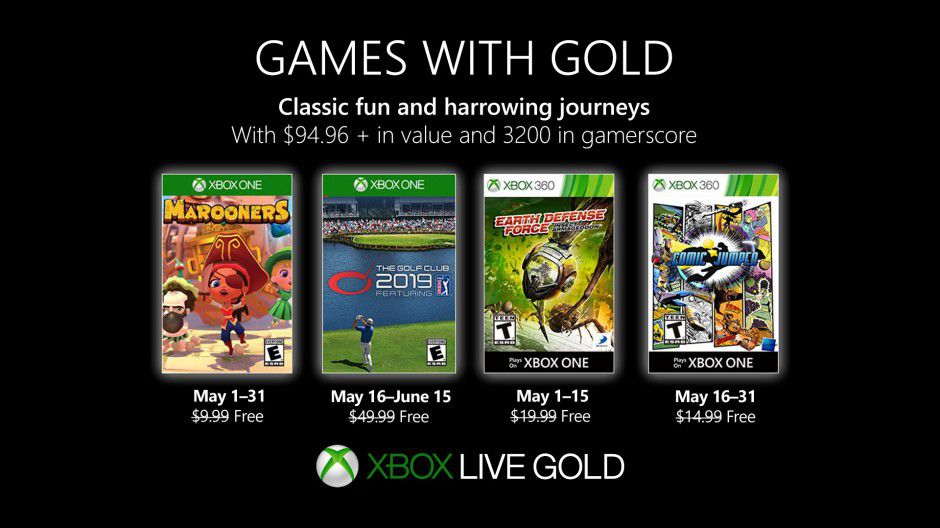